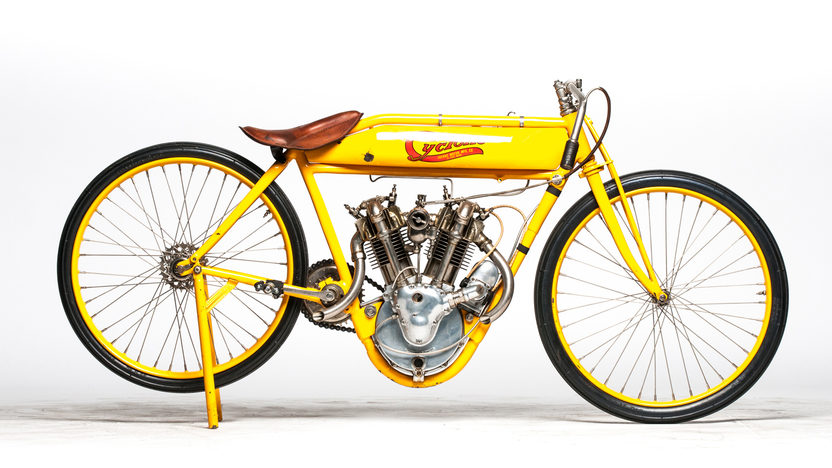 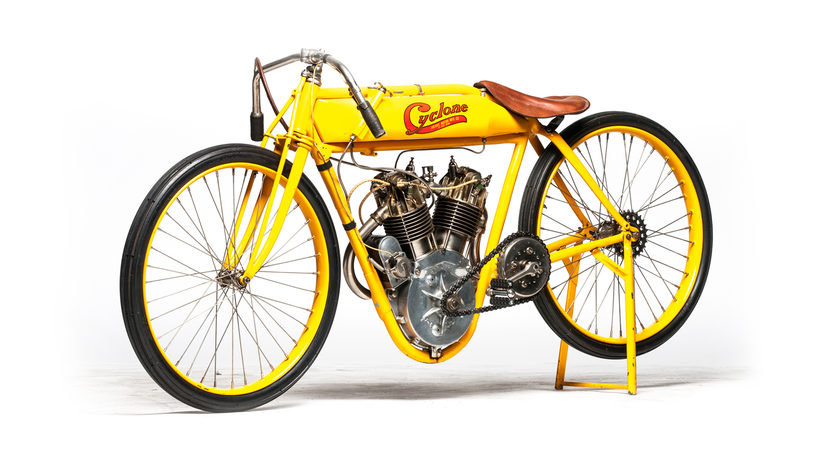 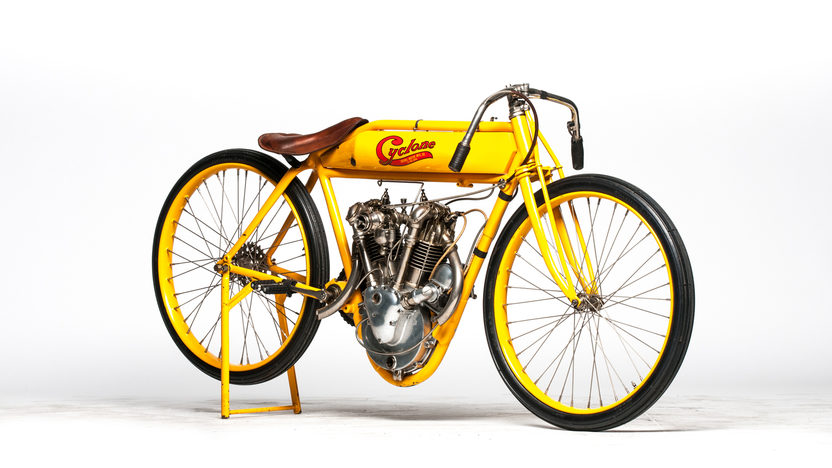 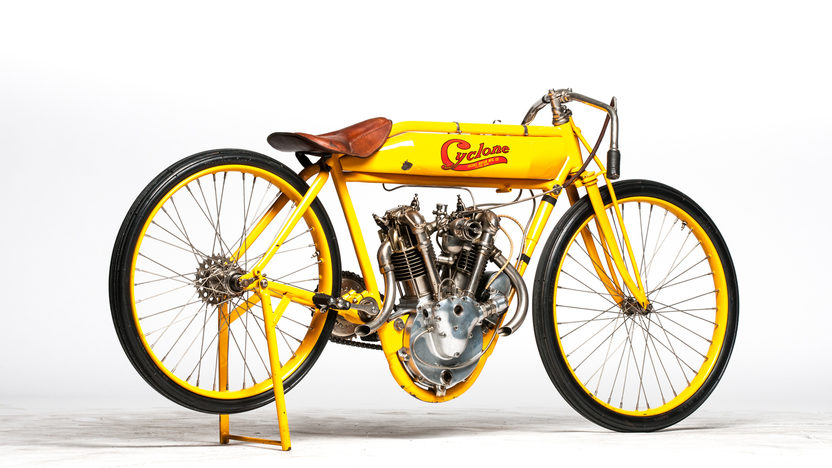 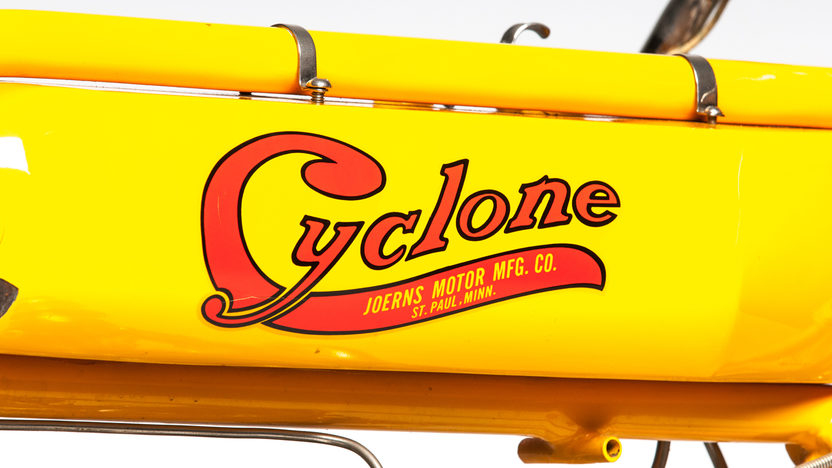 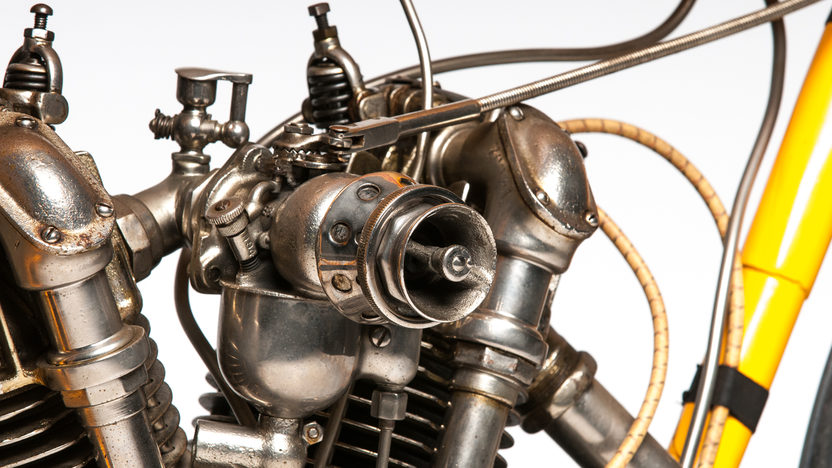 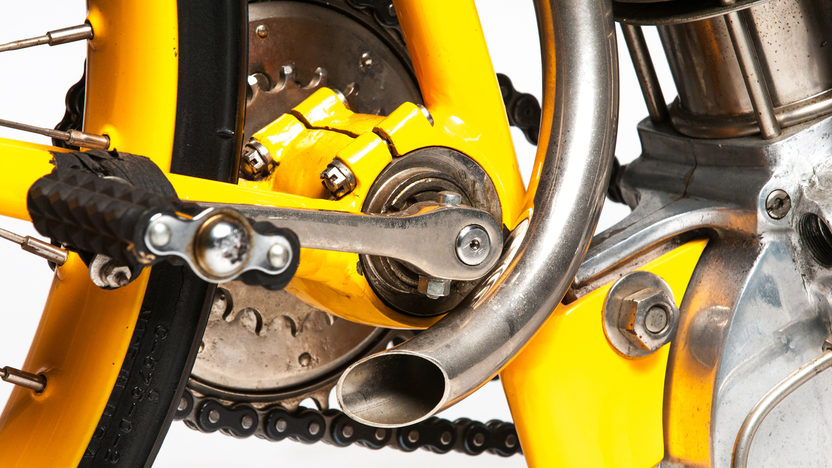 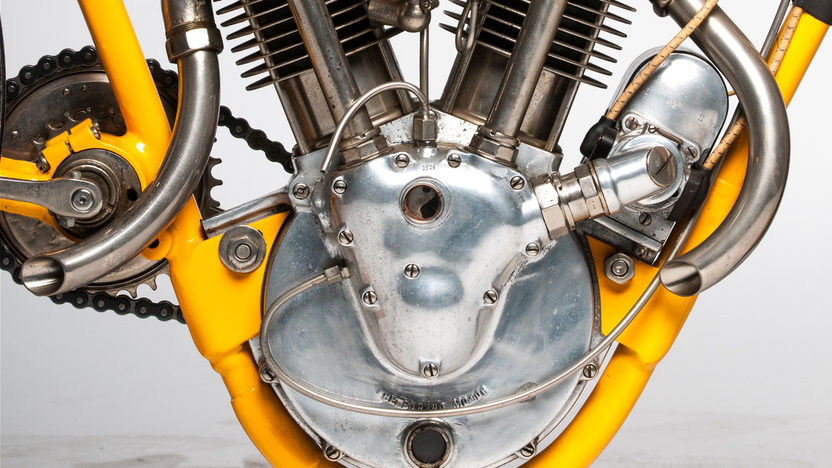 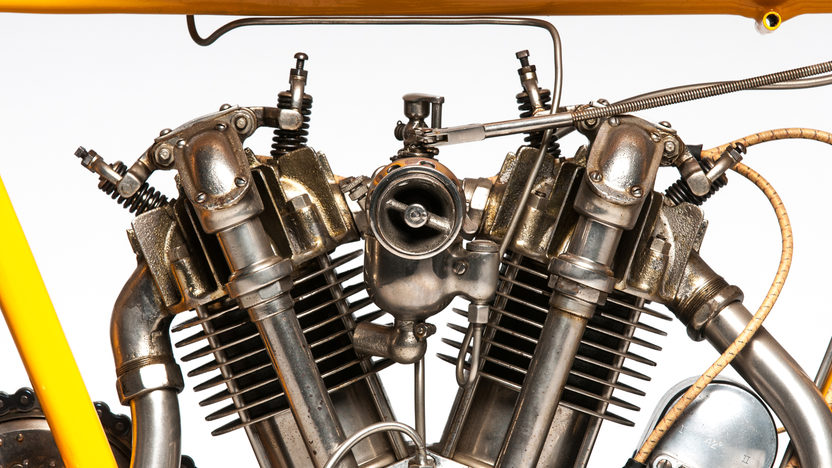 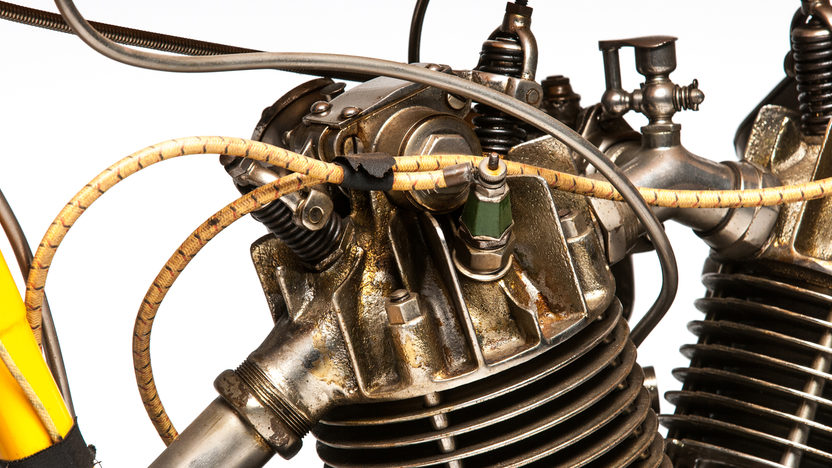 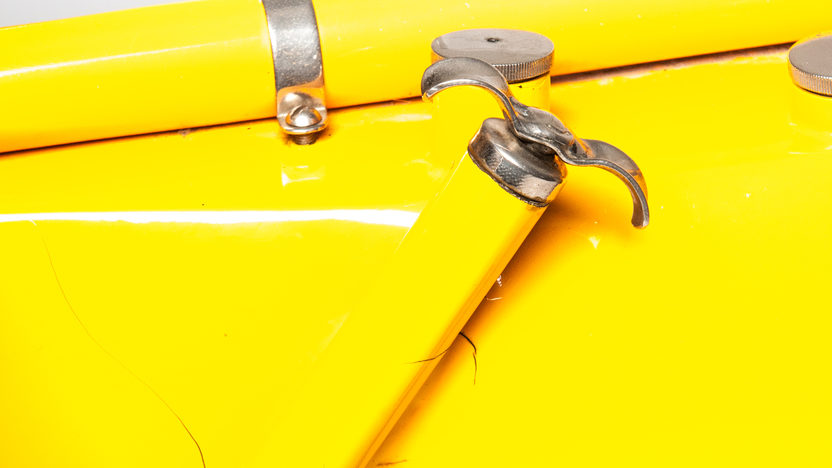 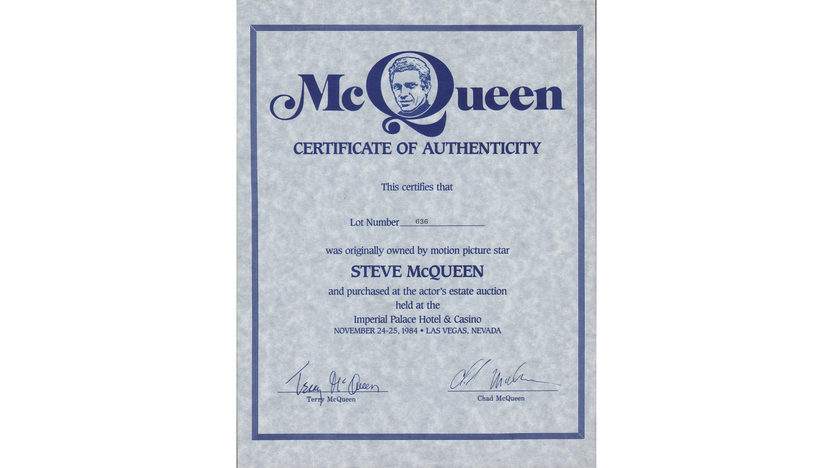 With a production run lasting only three years, the Cyclone has generated more excitement in the public’s mind than any other make, which began with its debut in 1913, and has never let up. The Joerns Motor Manufacturing Company of St. Paul, Minnesota, produced a remarkable OHC V-twin, with a 61 cu-in. engine featuring shaft-and-bevel drive single overhead cams as its most obvious and, for the time, radical feature. The engine presaged modern practice in other ways, including a near-hemispherical combustion chamber, proper caged ball and roller bearings throughout (when other bikes used plain bushes), and recessed mating faces on crankcase halves, barrels, and cylinder heads, for a secure fit. Even with a modest 5.5:1 compression ratio, the estimated output from the engine is 45 HP – which is simply astounding for a brakeless bicycle.

The Joerns MMC evolved from the Thiem Manufacturing Co., a long-established engine builder from 1903-11. Andrew Strand designed a new engine for the Cyclone, with a spoked forged-steel crankshaft, and a big-end running in three-rows of caged ¼-inch rollers. The crank was carried on four rows of caged rollers on the drive side, and two rows of self-aligning SKF ball bearings on the timing side. The connecting rods weighed a delicate 6 and 8 ounces for the plain and forked rods respectively, and the crankcase halves were machined with a mating lip, making it possible to assemble the bottom end with no shims for all those bearings, while maintaining a tight 0.001-inch crank end float. The cylinder barrels were deeply spigoted into the crankcase, and the combustion chamber was a very early ‘hemi,’ with huge 1 ¾-inch inlet and exhaust valves set at 70 degrees to each other. The singe overhead camshaft had no positive lubrication, but ran in a cast reservoir of oil, which could be refilled via a spring-loaded cap. The cam acted on rockers with a stirrup over the valve spring, which in theory, eliminated fore-and-aft loads to the valve stem. The camshafts and magneto were driven through long, elegant bevel drives, hidden within a shapely, rounded timing cover. The overall effect is strikingly beautiful.

The Cyclone’s technical specification made it the most advanced motorcycle engine built in America, and while the company built road machines, it’s racing that Cyclone is remembered for. In its debut year of 1913, factory development riders JA McNeil and Larry ‘Cave Man’ Fleckenstein were timed at 108 MPH in a Minneapolis motordrome. The next year, McNeil was timed at 111.1 MPH at the Omaha, Nebraska, board track, which was nearly 20 MPH faster than the internationally recognized world record of 93.48 MPH, held by Indian, and a 100 MPH mark timed by Lee Humiston on an Excelsior. Officials at the Federation of American Motorcyclists (FAM) simply could not accept the 111 MPH figure.

While its competitors were hardly tortoises, the Cyclone was certainly a hare, and didn’t always finish the important races it scorched. Weak points included the exhaust valve, valve stirrups, steel pistons, and the frames, with breakages common enough that few Cyclone board trackers still use their original chassis. The Joerns Manufacturing Co. was under-capitalized and barely managed to sell road machines; racing came first, and racing was very expensive. The cost of keeping a professional team going, and making improvements to the engine, were simply too much for Cyclone, which folded in 1916. Such was the company’s reputation that the tooling for the engine was passed through many hands in subsequent years, with the intention of resuming production, but this never happened. With more development money, or a merger with a larger company, OHC motorcycles might have been fixed in the American motorcycle scene 80 years before the V-Rod, but the Cyclone remained the sole production OHC V-twin built in America in the 20th Century.

The E.J. Cole 1915 Cyclone was restored by Stephen Wright, author of the ‘American Racer’ books. Cole purchased this Cyclone at the Steve McQueen Estate Auction at Las Vegas’ Imperial Palace in November 1984, where it was offered as Lot # 636. This combination of Steve McQueen and Cyclone is unique in the world, and it is by far the most interesting motorcycle owned by the King of Cool.